First Attempt At A Straw Bonnet

When I first became interested in making my own bonnets I stumbled across quite a few tutorials on how to make a bonnet out of a straw hat. While I liked how easy that seemed, I really wanted my bonnets to be a bit more sturdy and made the old-fashioned way. Plus, I didn't like the idea that under the fabric was a straw base, it just didn't seem authentic enough, I guess. But recently I have become a bit more interested in Classic Lolita and so I had been toying with the idea of making a straw bonnet without all the fabric covering it up.  Just a simple bonnet that really focuses on the country look of the straw.

Yesterday I finally got a hold of some reasonable priced straw hats, ones I wouldn't feel bad about chopping up and potentially having to throw away. I realized I didn't have any bias tape, so I used used some ribbon I had laying around. This lead to a kind of puffy looking trim, but it doesn't bother me so much and I'll be keeping this one for myself. 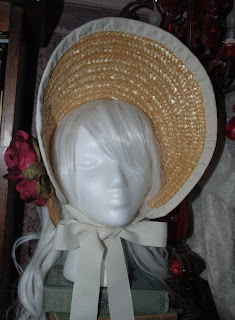 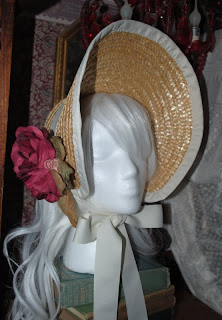 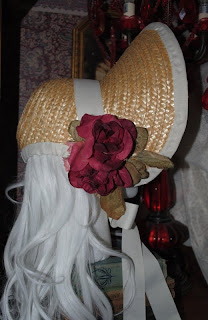 Instead of overloading it with roses and lace I made one simple corsage out of very realistic roses that look a bit like dried roses. I have had a few people assume this kind of fake rose was a real dried rose! There are a few tiny dusty pink roses in the corsage as well, but they are kind of hiding in these photos. I chose red because a few of my newest dresses are red, and if I am hoping the straw bonnet makes them look a little more Classic. 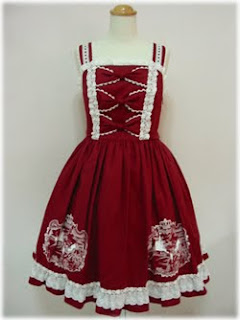 This is one of my new dresses. Well, new to me, as it is an Angelic Pretty dress from 2004! It's very sweet, but the red is dark enough that I am hoping to be able to make a couple Classic coordinates with it. Or at the very least, old school Sweet Lolita, which is pretty close to today's Classic Lolita.


If you're interested in attempting your own straw bonnet, here is a good tutorial for doing just that. This is the one I first found that eventually inspired me to make this one.

Since I have two more straw hats left, and these are fun to make, I might be selling them in my Etsy shop someday. They will be much, much cheaper than my normal bonnets. Probably around 30 dollars since materials cost is only a bit over $10. I am now a little interested in making a straw bonnet from braided straw now! But that's something completely new I would have to learn.
Posted by caro-chan at 3:12 PM