I discovered one of my tooth rings featured in a treasury devoted to bones. I was quite pleased by being featured in this treasury because I've always loved the idea of working with bones an teeth, both real and sculpted and resin-cast. The idea of creating something lovely out of something macabre has always inspired me.

This tooth ring has since been sold but I have a few more tooth necklaces, and one or two more rings, that I was holding off listing just because I had no idea how they would sell. I was afraid they might be too much for Etsy, but I have been pleasantly surprised to find that the ones I had listed sold out rather quickly. I actually really loved making the little clay teeth and am happy to know that I could probably make another batch of them and they wouldn't go to waste in my bead box!
Posted by caro-chan at 6:12 AM No comments: 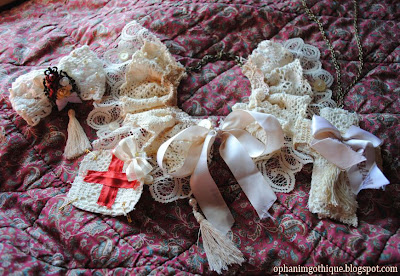 I've been spending the last week or so working on some Mori Girl inspired pieces! It's not a style I wear in it's pure form, but I love taking inspiration from it. I like it's raw edges, cute quirk, and ghostly styling.

The pieces in the picture above are just some of the things I've been working on! From left to right: bow brooch with "Classical Deco" cameo, nurse cross patch, a big lace collar necklace, and a lace cross necklace.

I don't know what my favorite part of making all of these are! I am pretty fond of stamping my brand name all over everything with individual letter stamps (à la the Mori accessory brand Incomplete Alchemist), tea dying lengths of lace and scraps of ribbon, or making the tassels by hand out of a ball of vintage string!
Posted by caro-chan at 5:31 PM 3 comments: 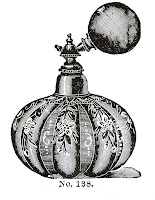 One particular crafty project I'm working on that I'm very excited about is custom perfume oil blends. I am slowly amassing a small army of single note fragrances and have been playing around and day dreaming about what I want to create! There are so many scents I want to try to create, inspired by so many different things. So far, I'm really enjoying this craft project, how could I not? I get to sit around and smell pleasant things all day (beats smelling E6000 all day!) and trying to imagine what unicorn glens and vampire crypts might smell like.

I hope to eventually have at least a couple scents for sale in my shop, once I work out some kinks and get some unsuspecting test subjects friends to help try out some scents and give me some feedback on them.

I've always had a fondness for perfumes, but I often find that commercial perfumes all tend to be a bit boring and all smell the same to me after a while. Personally, I don't really crave smelling like a purse manufacturer, or a tacky former pop star, there's no imagination behind that! So a few years back on a search for something a little different, something a little more me, I stumbled across the infamous Black Phoenix Alchemy Labs and was delighted to find a world full of perfumes inspired by dusty libraries, ancient goddesses, and witch's parlors. There are literally dozens of other artisan perfume shops out there, and I've sampled around a few of them, and now I think it's turn for me to try my own hand at creating the scents that I've dreamed about. Does the world need another artisan perfume oil vender, aren't there enough already? Probably not, but that doesn't mean I'm not going to experiment a bit with a craft I would love to try!
Posted by caro-chan at 9:42 AM 2 comments:

One day while hunting down some stained glass pieces for a different blog post I was writing, I stumbled across Parish Relics and was very pleased with what they had to offer: gorgeous medieval inspired jewelery pieces made with real stained glass and gorgeously textured and finished polymer clay! While maintaining an air of rough and almost primitive antiques, the pieces are also meticulously constructed and perfectly finished. I actually thought these were made with real metal at first! 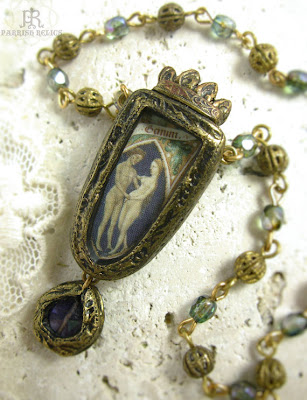 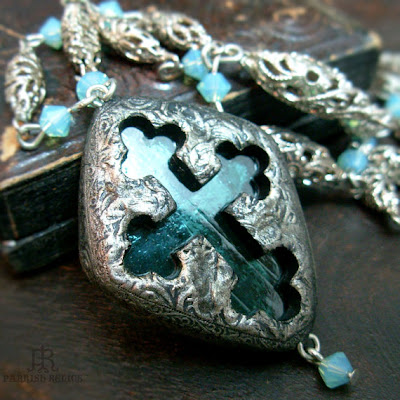 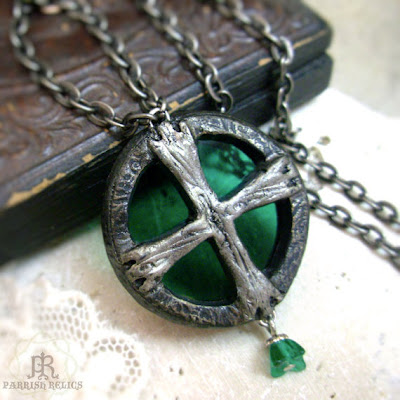 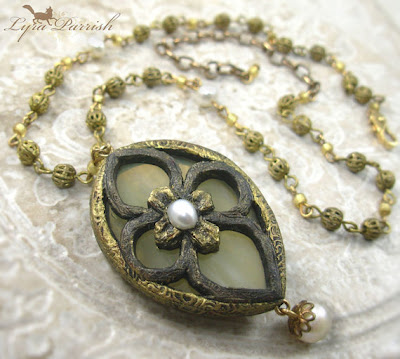 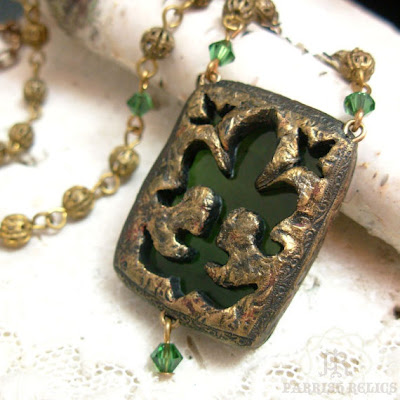 I've been thinking about these pieces ever since I saw them! I think pieces like this could easily be worked into any outfit to add a little bit of romance!
Posted by caro-chan at 10:31 AM 6 comments:

I finally managed to dig up all the pieces to my printer a few days ago, so to celebrate I decided to make some magnifying cabochons that I had been wanting to make for quite a while now. Before I started pouring my own resin pieces I enjoyed making pieces with magnifying cabochons and it was nice again to be able to make something pretty that didn't involve all that resin entails. With October just beginning, and Halloween around the corner, I am sort of on a bit of a morbid kick. 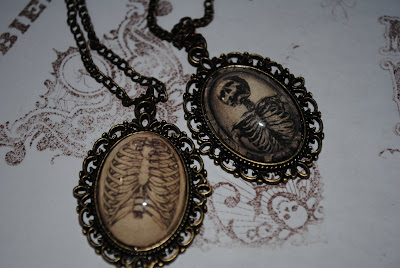 Some skeleton necklaces. An anatomical ribcage, and a 16th century engraving. 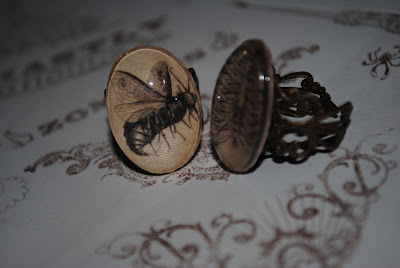 An engraving of Beelzebub and an anatomical ribcage. 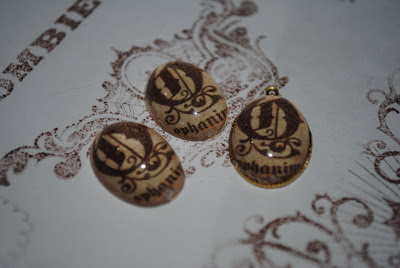 Some small cabochons with a big fancy "O" and my shop name. Don't quite know what I'll actually do with these! 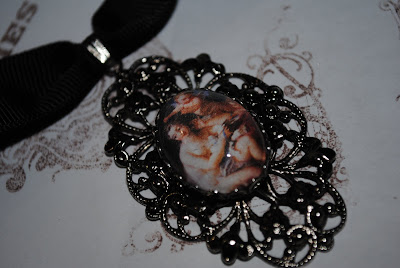 A choker with Boucher's The Toilette of Venus
I've also been seeing a lot of different kinds of cute bows with eyeballs in the middle, both in mainstream shops in preparation for Halloween, and in the Jfashion world. I actually have a little zip-up bag filled with doll eyes, because I am a collector of BJDs and I like to have some eyeball options, so I looted that for some acrylics. I only have very few acrylic eyeballs, as when it comes to BJD eyes I'm a fan of silicone, and I am not going to to be using my nice silicone eyeballs for craft projects, but I did manage to dig up a ton of not-quite-eyeballs that I was willing to sacrifice. 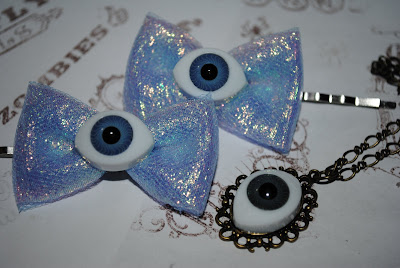 Cute and sparkly bows and a necklace.
I hope to have these things up, as well as a ton of other things I've made recently, including coffin shaped things and some jewelry featuring the infamous skeleton lady cameo, up in my Etsy shop in the next couple of days! Wish me luck in taking about a billion photos!
Posted by caro-chan at 6:47 PM 1 comment:

For the Love of Unicorns: An Etsy Treasury

Have I ever told you I love unicorns? I love them pretty much indiscriminately. From the bad ass stab-every-one-who-gets-in-my-way Medieval ones, to the glittery pink rainbow and dreams ones, to the somewhere-in-the-middle tacky 1970's ones that are so often found decoupaged and shellacked onto slices of wood ones. Recently, I was lurking around the local Goodwill when I saw an older woman walk by with a huge wooden picture/clock of the 1970's variety featuring unicorns in a magical glen, it took so much of my will power not to shout "Look over there!" while I stole the clock from her cart and made a run for the register. I was so jealous. But I'm not really here today to tell you about the awful and mean things I would do to old ladies in the name of unicorns, instead, I want to showcase some of my favorite handmade unicorn themed things from Etsy!

The unicorn I probably am most fond of is the unicorn of the Medieval variety. I love it for it's strangeness, it sometimes looks hardly anything like the typical horse-with-a-horn styled unicorn that is depicted nowadays, and I love it for its aforementioned bad-assery. It's never shown running along glittering rainbows into dream land. The Medieval unicorn is either peacefully content being it's bad ass self, or about ready to stab someone with it's horn. 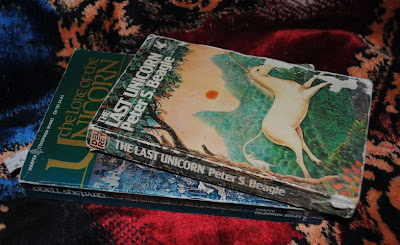 So I have a couple of beat up old unicorn related books. Want to read something interesting about unicorns? Check out this page with a brief history of unicorns throughout the ages.
I would love to create some new jewelery pieces featuring the unicorn, both the girly glittery kind, and the more regal kind. I am not exactly sure how I want to go about doing this, but I do have a few ideas floating around, from sculpting my own unicorn head and making a mold around it and making my own custom cabochons (something I've been waiting to try ever since I started casting resin) or maybe something simpler, like featuring unicorn art in some resin brooches.

Whenever I get a new resin mold I tend to "test it out" by making a batch of glitter filled pieces. Which, generally, is a pretty bad idea because that means the next time I want to use them I have to carefully make sure I get every single piece of glitter off, which I never can manage. But this time around, I bought a set of molds specifically for filling with rainbow glitter. An alphabet mold! 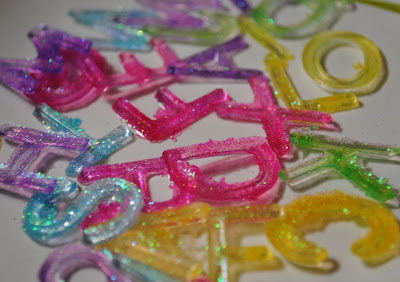 Fresh out of the mold, and full of extra bits that need to be carefully removed!
A while ago online I stumbled across an alphabet mold, and by the time I realized oh God, I need that, it was all sold out, so I had to hunt down another place selling the same one, which turned into a much bigger task than I imagined, as nearly everywhere only sold a significantly larger and fancier alphabet mold, while I wanted the small, simple letters. After several days of searching and actually emailing and messaging some sellers who had previously sold the set, I found a shop that was just so happening to make an order of molds and was going to add on the alphabet set for me. Awesome.
The letters came out pretty great, but were sort of a pain to fill. I had to carefully "paint" the resin in with a pour stick, and even a single drip out of the mold created a big pointy mess just waiting for me to have to file down later. Oh well, hopefully it's worth it! 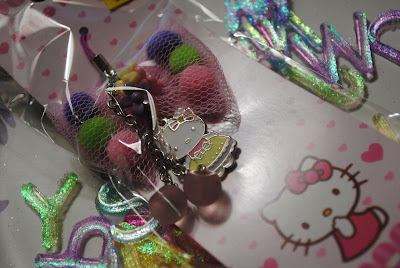 What do I plan on doing with this ridiculously glittery letters? Inspired more by the fairy kei side of things, and this awesome little Hello Kitty cell phone strap that I am saving for just the right moment, I want to make some purse/phone straps with words on them. Hopefully it works out, hopefully the little letters are strong enough, and hopefully I can find my awesome little hand drill, because I have been doodling the different things I want to make with these resin pieces in my notebook for a few weeks now!
Posted by caro-chan at 1:54 PM No comments: